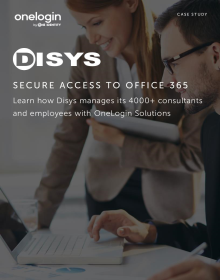 Using ADFS integration would have taken us a minimum of a week getting everybody set up and tested, and then the maintenance to keep it going would have really taxed my team. OneLogin boiled all that down to 30 minutes. It can’t get any simpler than that.

Collin Hachwi, IT infrastructure manager at Digital Intelligence Systems (DISYS), supports the company’s team of more than 650 employees and 4,000 independent consultants around the globe—many of whom are remote workers who use their own desktops, laptops, tablets or smartphones to conduct business. DISYS, a global managed stafﬁng and services company, utilizes cloud-based enterprise applications such as SalesForce to streamline many of its business processes, but when it came time to add new applications into the mix, Hachwi knew the company needed to consider a strong identity management solution that was scalable to accommodate the addition of new applications and users.

Adoption Drivers
With a goal of becoming a billion dollar in revenue company by 2017, DISYS continues to grow rapidly and expand globally. After implementing several cloud-based enterprise applications such as SalesForce, Ofﬁce 365 and BMC Remedyforce, the company was looking for an identity management solution that was scalable and could accommodate the addition of new systems.

“There was one that SalesForce offered, and some other pretty crude upload/download methods that were not automatic,” said Hachwi, the IT infrastructure manager responsible for desktop, network and voice services, as well as systems architecture. Hachwi’s team looked to Netﬂix for guidance. “We're trying to really mirror how Netﬂix enterprise IT operates and push new applications and infrastructure to the cloud,” said Hachwi. “We don't want to maintain a large internal infrastructure with a large team just to manage hardware. DISYS is continuing to grow, and we need to get the infrastructure in place to support that growth quickly. IT can’t waste time and valuable resources procuring, conﬁguring and maintaining hardware and network infrastructure. ”

BYOD Policy for Dispersed Workforce a Must
With 650 employees and roughly 4,000 consultants working at client sites, it was important to provide access to corporate applications via the web. Additionally, as DISYS expands internationally, supporting consultants will require secure, reliable access to the corporate network and all necessary business applications, regardless of the user’s location or access device.

Having consultants spread out geographically presents a unique challenge, since deploying and managing laptops to all of them would be way too costly and time-consuming, let alone present a huge security risk. “Our focus should be maintaining our systems, the data, and access to the data, while our consultants manage the hardware,” said Hachwi.

Keeping Infrastructure Simple
DISYS already had a datacenter in place, with plenty of expansion capability and compute and storage resources. “We had the datacenter because we run PeopleSoft, and we want to keep that in-house,” said Hachwi. “But as we added more applications into the mix to resell as services to our clients, we wanted to keep the infrastructure simple and easy to scale quickly.”

Maintaining the infrastructure to support additional applications such as Ofﬁce 365 and others would have been too big of a burden. “We would have had to spin up two or three more servers, maintain ﬁrewall rules, manage updates, and support everything internally.” said Hachwi.

Rapid, Secure Access, Without Rework
It was important to have access to the apps, because Hachwi’s team needed to show their clients they were using them and demonstrate best practices. “It’s our responsibility to provide access to the apps in a timely manner,” he said.

Although Hachwi’s team considered deploying Okta, the platform didn’t offer the integration capabilities that they found with OneLogin.

About Disys
Digital Intelligence Systems, LLC (DISYS) is an ISO 9001:2008 certified global managed staffing and services company that has nearly doubled its revenue over the past three years. Having rapidly grown from a 2-person basement operation to an award-winning multi-million dollar firm, DISYS ranks second on Staffing Industry Analysts’ annual listing of the Fastest-Growing U.S. Staffing Firms with over $300 million in annual revenue. The company is headquartered in McLean, Virginia, with offices and delivery locations worldwide in North and South America, Europe, and the Asia Pacific region.

SOLUTION
OneLogin provides the fastest path to identity management in the cloud with an on-demand solution consisting of single sign-on, multi-factor authentication, directory integration, user provisioning and a catalog with thousands of pre-integrated applications. !

Fast, Painless Deployment
Deploying OneLogin was quick and painless. “All the directory integration was already done,” said Hachwi. “I think it took us 30 minutes total. Using AD-FS would have had a much larger impact, and it would have affected our disaster recovery setup strategy, as well. We would have to set up and maintain those servers, as well as back them up. OneLogin eliminated all that hassle and made it really easy.” !

“OneLogin fits really well into our infrastructure, with easy setup and configuration, and the ability to customize rules and user roles,” said Hachwi. “It makes application deployment simple and streamlined for our team to manage and gives our dispersed employees and contractors secure application access at the click of a mouse.”

RESULTS
Fast toolset integration helps DISYS stay on top of its projects. “When you start growing so quickly, things can start breaking, and you have to keep up,” he said. “OneLogin helps us because we don’t have to spend time and effort on application deployment.”

Hachwi said the Office 365 roll out is the best example. “Using ADFS integration would have taken us a minimum of a week getting everybody set up and tested, and then the maintenance to keep it going would have really taxed my team. OneLogin boiled all that down to 30 minutes. It can’t get any simpler than that.”

As Hachwi’s team adds new toolsets, OneLogin will be the enabling technology moving forward. For example, the team was able to get BMC RemedyForce up and running on top of SalesForce in just days, because the integration was already in place.

“Our goal is to enable our users and to deploy solutions as quick as possible,” he said. “When we consider adding another tool, we look at the integration into OneLogin as part of the decision process.”

This is the end